Home / About Us / Our History 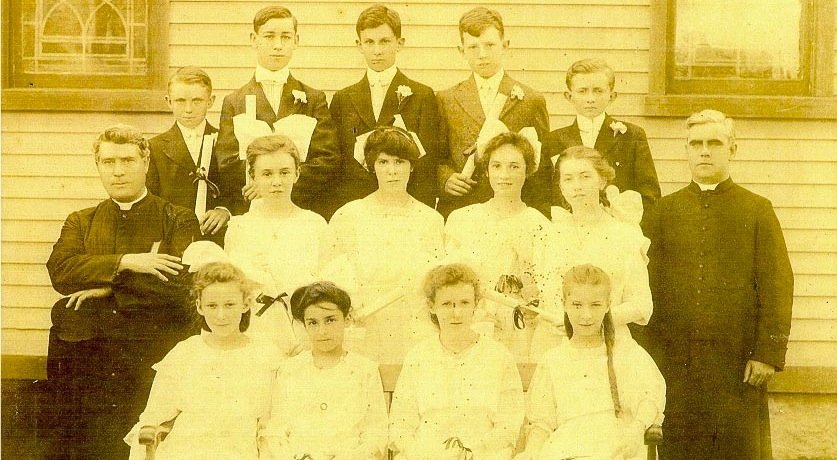 The roots of St. Michael School go back to the year 1873 when the parish school was built by the Rev. Jeremiah Fitzpatrick, Pastor of St. Michael Church, who recognized the importance of having a parish school. The school’s first home was in a house on the corner of Liberty Street and Robinson Street in Pawcatuck. The Sisters lived on the second floor and the school was located on the first.

In 1890, the original school was replaced by a larger structure on the current site atop Liberty Street hill across from St. Michael Church. The early part of the 20th century brought the first addition, then in the mid-1960s another wing was added to house the seventh and eighth grade classrooms, a boys’ lavatory and a science lab.

Although one Sister of the Holy Cross taught grade 5 for several years, St. Michael School has been staffed primarily by the Sisters of Mercy of Connecticut. The years have seen the transition from a staff of all Sisters to all lay teachers and administrators. June of 1984 saw the end of over a hundred years of service by the Sisters of Mercy. When the pastor learned that the Sisters would no longer be able to provide a Sister for the Principal position, he personally went to invite other religious communities to serve St. Michael School. He ended his search when the Sisters of the Religious Teachers Fillipini community offered to staff the School. In 1997, the last of the Fillipini Sisters left the school. The first lay principal in the history of the school was hired.

Changes and/or additions are part of the ongoing efforts to provide a well-rounded curriculum. The school adopted a Classical Catholic curriculum, a classical education for the modern world. In Fall 2020, St. Michael School transitioned to become St. Michael School at West Broad, moving into the “Old Lady of Pawcatuck” and joining together the two oldest educational institutions in the Town of Stonington.

This is just a thumbnail sketch of some of the major changes that have taken place over the years. Many more will be undertaken with the central purpose of making and keeping St. Michael School on the cutting edge of Catholic education at an affordable price.

St. Michael School, a ministry of the Catholic Churches of Stonington and North Stonington, is committed to engaging students in a program of Christian formation characterized by a challenging and enriching Catholic Classical Curriculum in a nurturing environment.

Gratis Accepistis, Gratis Date. "Freely you have received, freely you are to give."

AMAZON SMILE! Shop for You,
Amazon Donates to Us!